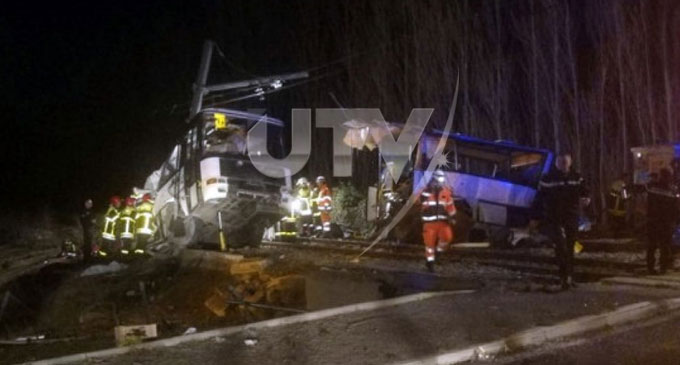 UTV | COLOMBO – A regional train hit a school bus on a crossing in southern France last evening, killing 4 children and critically injuring 11 other people on the bus, the French interior ministry said.

Photos from the scene tweeted by a local television station showed the train derailed and the bus shorn in half, with first responders gathered around.

French Prime Minister Edouard Philippe, who flew to the scene of the accident Thursday night, said that authorities still don’t know what led to the accident on the crossing in Millas, some 15 kilometers west of Perpignan, close to the border with Spain.

Philippe said that the “circumstances of this terrible drama are still undetermined.”

He confirmed that 2 inquiries are underway into the shocking accident.

Some 70 firefighters, 10 emergency ambulances, and four helicopters responded to the crash.

The school bus was transporting children home from the Christian Bourquin school in the small village of Millas.

It was carrying around 20 children aged between 11 and 15, the local authority said.