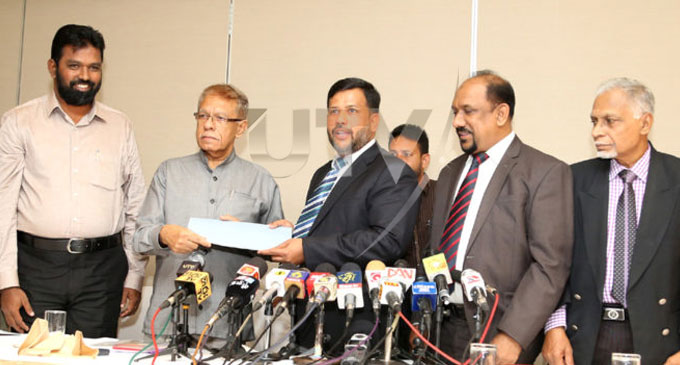 UTV |COLOMBO – The All Ceylon Makkal Congress (ACMC), which was instrumental in ushering the good governance administration to Sri Lanka, has announced the formation of a new political alliance ahead of forthcoming Local Government (LG) polls. Interestingly, this announcement also the first major political development in Sri Lanka’s LG polls’ season, giving an early start to February 2018 countdown.

“This is a turning point in Sri Lanka’s Muslim political history. The ACMC led by me and the United Peace Alliance led by Basheer Segu Dawood MP are joining to form the United People’s Alliance (UPA). The UPA we are creating today will first contest in Eastern Province where a Muslim majority exists. UPA will therefore enter local politics in Ampara District in the forthcoming LG polls. The symbol of UPA is the peacock and its Chairperson is M.T. Hassan Ali, former Secretary General of SLMC and the present Secretary of United Peace Alliance. Hassan Ali, being a former Parliamentarian and a State Minister is well positioned to start off UPA’s journey. As the leader of ACMC, my role in UPA is to be decided later on” said ACMC Leader and Minister of Industry and Commerce Rishad Bathiudeen on 10 December. Minister Bathiudeen was addressing the special media briefing to announce the launch of UPA at Renuka Hotel, Colombo on 10 December. Joining him were many other representatives of ACMC  as well as representatives from United Peace Alliance.

Three years ago on December 22, 2014, the ACMC Leader and the Industry and Commerce Minister Bathiudeen exited the then ruling UPFA coalition and joined the Common Opposition Candidate Maithripala Sirisena. The result of Minister Bathiudeen’s departure from UPFA was the loss of UPFA’s powerful two-thirds majority in Parliament after four-year rule -and the onset of good governance administration of HE President Maithripala Sirisena and Prime Minister Ranil Wickremeinghe.