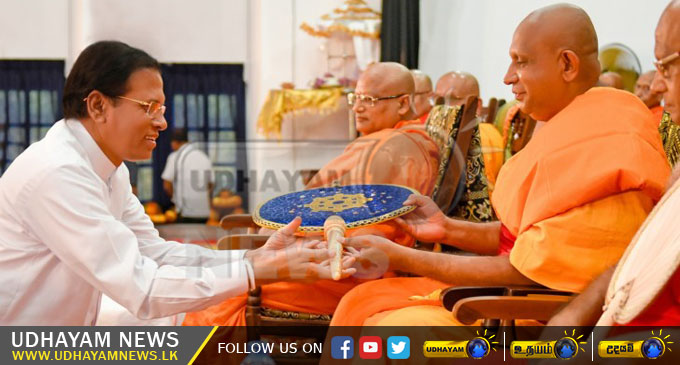 (UDHAYAM, COLOMBO) – President Maithripala Sirisena emphasised that the responsibilities vested in the Government, according to the Constitution regarding the unitary status of the country and the place given to Buddhism should never be abandoned under any circumstances.

He made these observations at the ceremony to present the Scroll to the newly elected Chief Sanganayaka of the Eastern Province and Thamankaduwa, Egodapattu, Venerable Makuruppe Pannasekara Nayaka Thero at the Mahaweli Shalika Hall Dehiattakandiya, on Monday (10).

President Sirisena further said that the expectation of the people regarding the new Constitution is to see that their request to change the existing electoral system and to introduce Proportional Representation System and said that in the process of building national reconciliation, and devolving power, a scientific political mechanism, which would, under any circumstance not divide the country or change the unitary system should be evolved.

Addressing the gathering, the President said that the resources needed for the education sector, were not given in any era, like this period.

The President vested the newly built Technology Laboratory at the Medagama Secondary School with the students.

President Sirisena after opening the newly built Technology Laboratory made an inspection tour of it and promised to construct a new building comprising of 8 classrooms for the school.

The staff of the school, including the Principal R.M. Shantha and parents participated in this event.