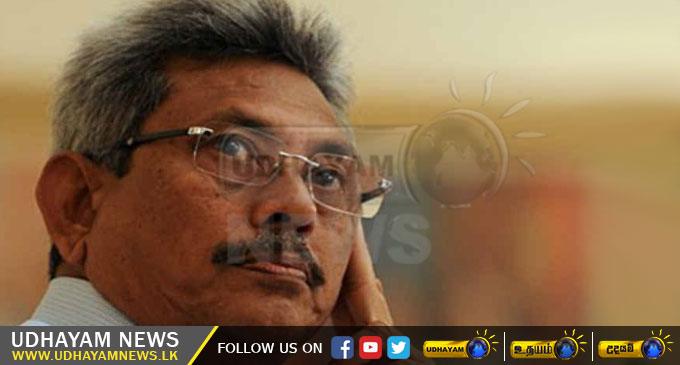 (UDHAYAM, COLOMBO) – Denying the corruption and war-crime allegations against him, Sri Lanka’s former Defence Secretary Gotabaya Rajapaksa on Monday (27) hinted at a possible entry into active politics in future, The Hindu reported.

“I have not decided yet,” he told foreign correspondents here, without ruling out the option. A few of his supporters have been floating the idea of his Presidential candidacy in 2020.

“If I can do something for the country, I will do that. I have that capability and I have proved it – whether during the war or in urban development. I did what nobody had done,” said the brother of ex-President Mahinda Rajapaksa, who led the armed forces against the Liberation Tigers of Tamil Eelam (LTTE).

He was willing to work with a leader whose policies were agreeable, he said.

Following the end of Sri Lanka’s civil war in 2009, some sections in the country have charged Mr. Gotabaya Rajapaksa of grave human rights offences – allegations he has denied as baseless and politically motivated.

The former Defence Secretary on Monday disagreed with the United Nations (UN) figures of one-lakh civilian deaths during the war as he said “There is no clarity on the actual number of casualties”. And amid mounting protests by families of disappeared persons in the Tamil-majority north, many of whom accuse the military of abducting their relatives, he said that going back and “Harping on” it would not help bring communities together. “After a war what can we do?” he asked.

A controversial figure, Mr. Gotabaya Rajapaksa currently faces corruption charges of “Causing a $75 million loss” to the country. In the past, his name was also linked to Bodu Bala Sena (BBS), a group of hard-line Buddhist monks accused of hate speech and inciting violence against minority Muslims.

Recently, Sri Lanka’s Criminal Investigations Department (CID) told a Magistrate Court here about “Top-secret death squads”, reportedly linked to the defence establishment under former President Mahinda Rajapaksa, but Mr. Gotabaya Rajapaksa said there were no such units. Claiming that “A lot of things happened without my knowledge,” he added that he was working more at the “Policy and strategy-level and not on things at the tactical-level.”

Observing that he had never been a politician, unlike his family members who had been in politics since 1935, he said: “But Donald Trump has come from [business]. We have to see.” Asked if he considered the United States (US) President a model, he said: “Yes, I am looking at him and studying him.”