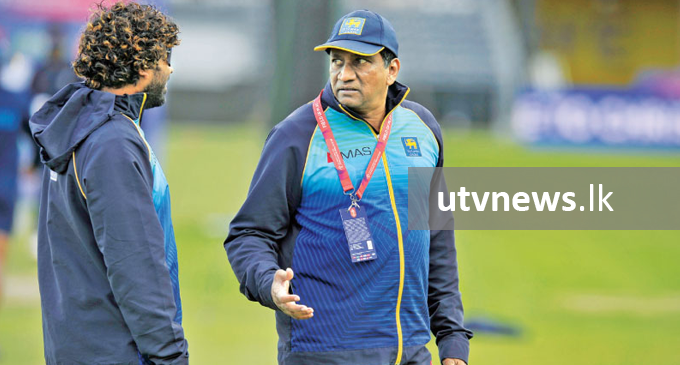 Sri Lanka lost their opening match against New Zealand by ten wickets after being bundled out for 136 and against Afghanistan it was their bowlers who won the match after another familiar batting collapse that saw them dive from 144-1 to 201 all out.

“Mainly all the players who are here are talented and we can easily win against any other team. But in order to do that we have to perform at optimum or according to our potential,” said De Mel whilst keeping an eye on the practice sessions taking place ahead of today’s game against Pakistan.

“If the opponents beat you on that day, you have to say ‘well done’ because the opponent on that day was better than you. At the moment what I see is we are under performing, we are not playing to potential. It’s not that the opponent is playing well. At 144-1 against Afghanistan we had it on the plate to easily score above 300 but we didn’t perform to our potential,” he said.

“One of the main reasons is their lack of confidence. What is happening is when you are not confident you are playing shots in between. It’s either you play or don’t play, but when your confidence levels are low you play half shots like the shots that (Kusal) Mendis and (Angelo) Mathews played against Afghanistan. Both balls were outside off stump and those were not wicket-taking balls, we just created the pressure.”

De Mel who played in two World Cups in 1983 and 1987 said that the players must believe in themselves that they are good enough to be in the circuit.

“You don’t look at giants but you must have belief in yourself that you are good enough to be in this arena with the rest and you must back your potential and your talent. The important thing is that you must be mindful and clever to play to your strengths, not to the opponents’,” said De Mel. “You must pick and choose the areas that you are confident in instead of just coming in and blasting the ball all the time. On these kinds of wickets you have to make sure that you get in because the ball does a bit all the time. All the wickets here are a bit green and the weather being cool and overcast, the ball does a little bit so you have to be careful. Once you get in, there are enough of runs to make.

“The bowlers also must learn how to bowl proper lines and keep the ball in the correct areas because we don’t have a world beating bowling side. In order for us to get wickets we have to create pressure. The only way to create pressure is to bowl tight and our fielding must back it – stop the singles, take sharp catches, the run out created by Dimuth, those kinds of things we must put the pressure so that the batsman is forced to create a risk,” continued De Mel.

“Lasith (Malinga) in his days was one of those who could come and blast a side out but now he is 35 and lost about 10kmph of his pace but still very effective. He is not the world beater that he was. When we started playing cricket in the eighties we played with giants like Greg Chappell and Viv Richards and we had the feeling that we were good enough to be there. That is the mindset that you ought to have. You must have self belief. That is the most important thing. You must believe that you are good enough to be in the arena.

“When you get hit the important thing is not to lose heart. That’s why a person like Malinga has the advantage. He has the experience.

“The only way players can get the experience is by playing. Unfortunately in Sri Lanka, the moment someone fails in one or two games the pressure is there from everybody to drop him. When you pick somebody you’ve got to back him a bit otherwise they will never come good. Unfortunately that is part and parcel of today’s game. You have to be strong enough to overcome that. The potential is all there, it is a case of that they have to believe in themselves,” De Mel said. (DN)