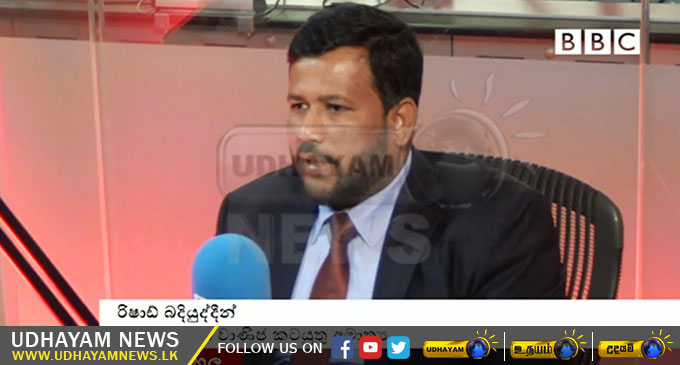 (UDHAYAM, COLOMBO) – The jungles surrounding the Wilpattu sanctuary were cleared neither by Muslim IDPs nor people but by state authorities themselves, revealed to a top Lankan Cabinet Minister in London.

“I can vow, with responsibility, that none of these IDP people are responsible for this destruction. It is the government using state resources, cleared the forests” said Minister of Industry and Commerce and Vanni District MP Rishad Bathiudeen on 12 March in London.

Minister Bathiudeen was responding to a question posed to him by BBC’s Sandeshaya program’s Thisara Rathuwithana in London’s BBC Studios on March 12 during a Sandeshaya episode taping.

Minister Bathiudeen, himself a Northern refugee once, responded: “Even today, I feel for these (Muslim IDP) people. No one in Geneva talks about them-Not even the European Union, India nor even the Arab countries talk about them. One thing is to cutting trees. Resettlement in a tree cleared land is another, different issue.  The trees were removed not by the people but by the government itself, through government’s State Timber Corporation, Divisional Secretary and Department of Forest Conservation. Therefore these accusations are part of a conspiracy against the people by a certain group to create a communal rift between Sinhalese and Muslims. There is no forest destruction done in order to resettle these people. These people did not destroy the jungle as per their own whims and fancies. There is nothing wrong in resettling in your own land if you have a land deed even inside the jungle. How can I, as a Minister, prevent people from resettling in their own legally owned lands? There was destruction of jungle in the surrounding areas but I can vow, with responsibility, that none of these IDP people are responsible for this destruction. It is the government, using state resources, cleared the forests.”  Minister Bathiudeen was meeting the BBS Sanseshaya team on the sidelines of his visit to the inaugural Commonwealth Trade Ministers’ Meeting held on 9-10 March at Lancaster House, London.

Scroll down to watch the video….