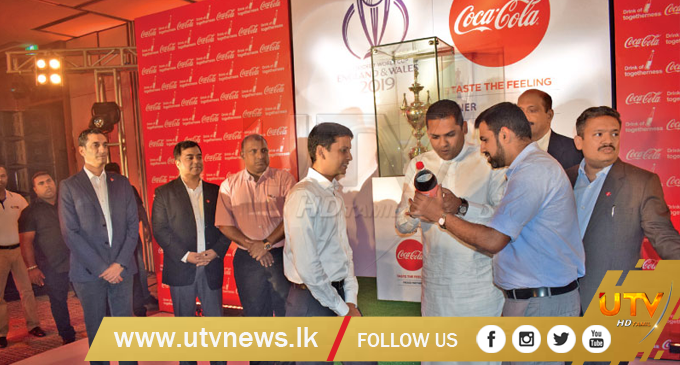 (UTV|COLOMBO) – Sri Lanka’s hero of their 1996 World Cup win Aravinda de Silva and Coca Cola have a lot in common. It was Coca Cola who sponsored his brainchild Cricket Pathway for a decade and moreover it was when Coca Cola was a sponsor of the World Cup that Sri Lanka won the coveted title in 1996 where De Silva played the leading role in helping his country to win the most prized trophy in cricket with a blazing century in the final against Australia at Lahore and was adjudged the Player of the Final.

De Silva was among the distinguished guests invited for the Coca Cola launch of ‘Drink of Togetherness’ at Shangri-La Hotel where the soft drink beverage company has once again tied up with the ICC for the 2019 Cricket World Cup in England starting from late next month.

De Silva said that he could not refuse the invitation extended to him by Coca Cola because of the support they had given him in the past and he postponed his scheduled trip abroad to be present for the occasion.

“Even at that time there were different camps but they all supported the cause in every possible way without any hesitation. That kind of support is what we require today for the national cricketers. It needs to start from the top. The hierarchy should be strong and together and have one vision to get to where you want in cricket today. That goes not only to the cricketers but also to the government officials in this country. We have to be an example to make sure that the youth of this country follows the same,” he said.

De Silva stated that when the team is down it is the time to extend your full support to them.

“I heard someone mentioning reunite the fans but it’s not the case. The fans are always together and they all want one thing – for Sri Lanka cricket to flourish and to be successful,” said De Silva.

“Every time I go out of the country and hand my passport at emigration the first thing they say is ‘I don’t feel like watching cricket now unlike your days’. That is the wrong idea because we have to remember that during our time we also faced defeats and we have learnt so much through those mistakes. That is what brings success. You learn from your mistakes and you need proper people to guide you. De Silva recalled that he was fortunate that when he played for his school (DS Senanayake College) he had the privilege of having the best coaches at the time WAN Silva, Charlie Warnakulasuriya and PW Perera of whom two were coaching the national team.

“Life is such that it’s like your heart beat, it goes up and down. If it goes in one straight line you’ll be dead. Similarly cricket is the same and we have to understand that. We don’t have success all along there will be failures also but we need to identify where we have gone wrong and make sure that we don’t keep repeating those mistakes over and over again.”

De Silva appealed to the media not to be too critical on the players but to criticize the hierarchy.

“When it comes to the cricketers the impact is greater because they are carrying a huge burden by representing 21 million people of the country and getting onto the field with a lot of pressure. I meet these cricketers quite often, they come and talk to me for advice and sometimes I have to tell them to just forget about social media and criticism that is being thrown around for the simple reason for that is what puts pressure on them to go out there and perform,” said De Silva.

“One thing that I can humbly ask is to support these cricketers. They have the talent to be successful and even if they lose as long as they give out their 100 percent on behalf of our country we should be proud of them. My wishes and prayers will be for a successful World Cup,” he said.

Sports Minister Harin Fernando who was the chief guest whilst admitting that he was a huge fan of Aravinda de Silva said that the present Sri Lanka team although currently going through a rough patch had all the ingredients in them to reach the top during the Cricket World Cup.

“Sri Lanka has always been competitive and do not make a mistake Sri Lankans do well when we are underdogs. You never be doing well when you are rated as one of the top sides but when everybody starts laughing at us that’s when I always say ‘when the going gets tough the tough gets going’. We do go through a rough patch but I am pretty confident knowing the 1996 World Cup sponsor was also Coca Cola be rest assured this time Sri Lanka will do fantastically well. I am 100 percent sure,” said the Minister.

Sundeep Bajoria, vice president South West Asia Operations Coca Cola said the first phase of the Coca Cola partnership with ICC unfolds in Sri Lanka through an Under the Cap campaign where consumers have to pick up a Coke, Sprite or Fanta look under the special yellow caps and SMS the unique Coke code under the cover to 2343.

Throughout the campaign period 30 lucky winners will receive an ICC World Cup ticket from Coca Cola Sri Lanka. In addition the company will also give away 600 smart phones to consumers through a digital raffle draw which will be conducted throughout the campaign. The campaign is active from April 1 to June 1, 2019. (DN)