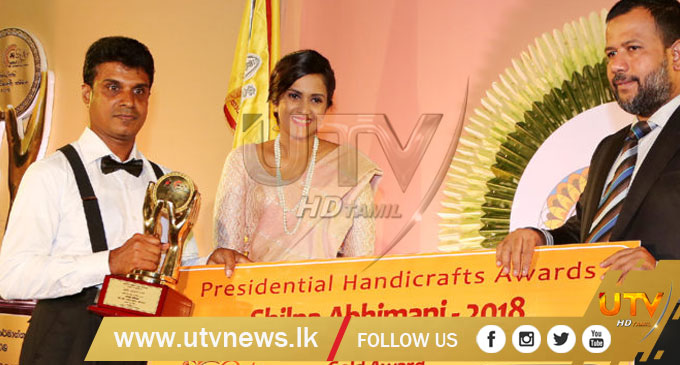 (UTV|COLOMBO) – Sri Lanka’s first ever insurance cover for its artisans and craftsmen will commence this March. The insurance scheme, initially proposed by HE President Maithripala Sirisena in 2017, has been a rallying cry by many local craftsmen for years. Meanwhile, the second national census of the country’s handlooms sector too is to be completed by March 2019.

“The handicrafts sector is one of the largest self-employment sectors in Sri Lanka” said the Minister of Industry and Commerce, Resettlement of Protracted Displaced Persons & Cooperative Development Rishad Bathiudeen on 24 January. Minister Bathiudeen, joined by Chairperson of National Crafts Council Heshani Bogollagama and craft award winners was addressing the Shipa Abhimani 2018 Presidential Awards event at Battaramulla on 24 January.

“I am pleased to say that for the first time in our handicrafts history, we are introducing Sri Lanka’s first insurance scheme for our crafts-people. This insurance was first proposed by HE President Maithripala Sirisena in 2017.  We are investing Rs seven million for this scheme” said Minister Bathiudeen, and added: “This scheme is called as Shilpa Suraksha and will cover 23000 craftsmen by 2023. The first stage will be launched this March giving coverage to 5000 craftsmen. We are also introducing new digital technology to Sri Lanka handlooms sector which closely works with handicrafts. We are planning to introduce nine hi-tech Jacquard handloom design machines to the nine provinces to upgrade this sector for the first time after many decades. I am also pleased to say that this March we will be completing our national handloom sector census. This is Sri Lanka’s second national handloom sector census since 1978. This will cover overall handloom sector. Also with Japan based International Research Centre for Intangible Cultural Heritage in the Asia-Pacific Region (IRCI) the government is now working on a project on the revival of traditional textiles and women’s handicrafts in North and Eastern Provinces. With such important initiatives I have no doubts that our craftsmen will have better market opportunities and a promising future.” Sri Lanka’s first artisan insurance scheme shields lives and accidents of craftspeople and not their product / vendor liabilities.

Chairperson of National Crafts Council Heshani Bogollagama said that Sri Lanka has an ancient heritage of creating crafts. “Making of crafts has been an ancient art form applied to most spheres of the daily lives of the people. Artisanal products of Sri Lanka, contains within itself the incredibly rich philosophy of the country’s civilization, its culture, and its practices. By training craft-persons to think different, it was possible to meet world standards and enable our crafts to compete in world markets. This would also improve the economic condition of the craftsperson” said Chairperson Bogollagama.

Lately the NCC has expanded its crafts training. More handicraft training centers under NCC now conduct various courses around the country for its present and future craftsmen.

Over 100,000 craft-makers are estimated to be engaged in Sri Lanka’s handicrafts and 28000 of them are registered with the National Crafts Council, for whom this insurance will be given to. The local handlooms sector also works with handicrafts (Lankan handloom output was estimated at US $ 10 million in 2011/’12). At the 24 January event, five Lankan artisans also collected World Craft Council Asia Pacific’s Award for Excellence from Minister Bathiudeen.